As I write these notes the Winter shutdown is almost upon us. Our preparation is complete: we have a refurbished three-lever ground frame with an Annet’s key release in the stores. We have loaded three cable drums into a brake coach with thanks to Don Shadwell for his efforts on Sunday 29th with the JCB. We will use this coach after the line has been severed to take the cable to the work site at Falling Sands once the track has been replaced and partially ballasted and a troughing run has been laid on the surface. That saves us digging a trench for it and the ballasting can be completed to cover the troughing.

For nostalgia’s sake, I include a photograph showing how we used to do it. 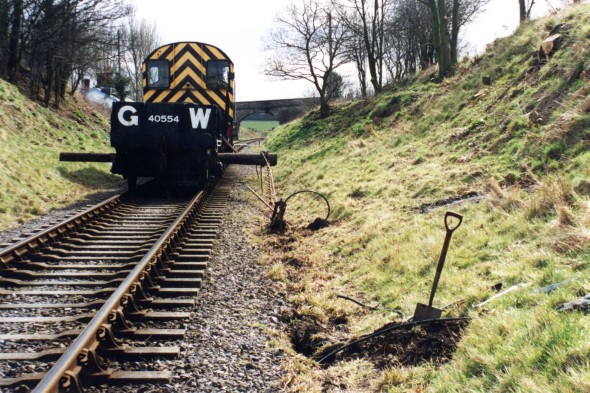 It is early 1995 and mole ploughing is about to resume. This is how we used to direct bury signalling cable - a telegraph pole provides an offset pull to keep the plough straight.

After the floods, the signalling cables between Hampton Loade Up Distant (Waterworks Crossing) and the Up Homes were replaced where they had been damaged and a troughing run installed over the affected section. This cable has since been damaged, probably by a lightening strike, but the location of the damage is unclear. Several cores have failed and have been temporarily diverted into an adjacent cable. The cable run is 668 yards long, partially in troughing and partially direct buried. We have acquired a cable tester and this had its first outing under ‘real’ conditions in November.

The first step was to establish the ‘characteristic’ of the cable by sending a signal down some undamaged cores in the centre of the cable. Tony and James walked to the Up Distant to disconnect these cores and add a shorting link. Our electrical guru, Dave Stowell, set up the tester and the reflection from the far end could be seen clearly shown in graphical form on the display as a pulse. Adjusting the tester to show this as 668 yards, the test was repeated on one of the damaged cores. This should reflect back short of the full length, where the cable is damaged. The reflection from the fault could be seen at a distance calculated to be about 580 yards away, 110 yards from the Distant. We walked out and were advised that nothing could be seen at 110 yards from the Distant. The test was repeated from the far end and showed a reflection 180 yards away. Splitting the distance and calling it 145 yards the fault was found immediately. Two of the three cables (the rubber coated ones) had split open and the insulation on the outer cores had melted. The signalling cable from there to the Up Distant had suffered severe water ingress and would have to be replaced. The power cable was cut back each side of the fault and jointed to a new length.

A further visit with a longer peice of signalling cable is needed to replace a length of about about 180 yards. Fortunately this section of cable is wholly within troughing. Other work carried out during November and December included bringing into use the new location cupboard at Hampton Loade’s Down Distant installed a few years ago and refurbushing the LED lamp fitting provided in Bewdley North’s Up Home Banner Repeater.

Replacing the lead off cranks at Hampton Loade is planned for January. This is one of our major pieces of Winter work. The plan is to visit on Sunday 12 January to disconnect all signals and points. A contractor will remove the existing walkway and the four damaged timbers (these are 12″ x 5″ in section and ten feet long) and install two new timbers. We can then visit on 19 January to fit the south end cranks and on 26 January to fit the remaining cranks and signal wire wheels after the walkway has been reinstated and recommission the points and signals. All Winter work is subject to the weather ...

Foley Park Sidings is the focus of our remaining Winter work with the work split into stages. Only stages 1 and 2 need to be done before services resume in April 2020. Stages 3 and 4 can be done in either order but stage 3 requires a possession of a few days and was originally to be done as part of stage 2 but has been deferred to reduce the risk of a delay.

Stage 1 (30 December): expose the signalling cable over Falling Sands Viaduct and disconnect it from the location cupboard at the Up Homes. The other end of this cable is at the Up Distant where the links will be removed to isolate the cable (and the track circuit ends removed from the rails). Uncover the cable (and the 110V power cable) from the Up Homes and as far as the existing insulated rail joint (IRJ) the other side of the Viaduct and cut it short. Plant a new location cupboard on the Bewdley side of the existing cupboard near the IRJ and terminate the shortened cables inside it.

Stage 2 (March 2020): provide a facing point lock (FPL) for the newly-installed switches, secure them in the normal position and provide normal detection, indicated in Kidderminster signal box and connected into the single line controls. This can be done without having to replace the signalling cable between the motor points by the Carriage Shed and the section signal as there is a single spare pair in this cable - enough to provide indication but not a ground frame release. The cable across Falling Sands Viaduct will be replaced by a new one from the Up Homes to the new location cupboard, laid in troughing across the Viaduct. The track circuit relay for AA3 (Up Distant to Up Home berth track) will be housed in the new cupboard fed from the Up Distant. The new indication and the existing track circuits will be recommissioned and advice provided to the signalmen. 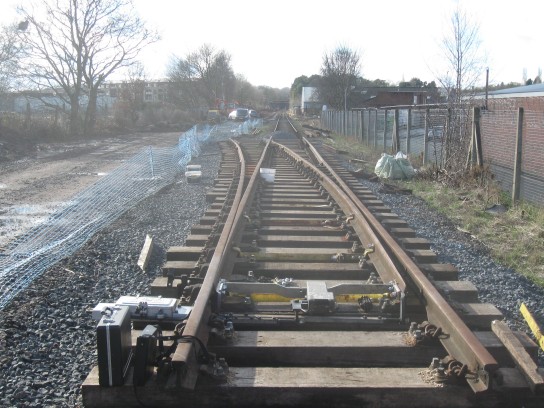 On 23 February 2020 stage 2 is mechanically complete (apart from FPL plunger which has been taken away for machining). [Photo: Author]

Stage 3 (April/May 2020): dig up the existing signalling cable between the motor points and the section signal and renew using a trenching machine to bury the new cables. This will provide an extra spare pair to carry the electrical signal to release the Annet’s key to unlock the ground frame.

Stage 4 (April/May 2020): install the new ground frame adjacent to the new switches and commission the point rodding. This will allow the ground frame to be brought into use out of hours only using the existing possession key to unlock the ground frame once the ‘B’ end of the siding crossover has been laid and sidings connected.

In February 2020 we are also planning to replace the timber platform on the Up Homes at Kidderminster and have prepared replacement vertical supports. Scaffolding has already been erected to allow the signal to be repainted once the old timbers have been removed.

The new ground frame at Foley Park Sidings will allow access to the new sidings either out of hours or with the boxes open. For a train to leave the sidings, the Shunter will ring Kidderminster box and ask for a ground frame release. The Kidderminster signalman will send an appropriate bell code to Bewdley South who will reverse his acceptance lever. This will provide a release for either the section signal (as now) or the key control instrument. The latter will release an Annet’s key at the ground frame to unlock it. Once the ground frame is locked up again, either with the train on the main line ready to depart or locked inside the sidings with the single line section clear, and the Shunter has been advised that all is in order, the Kidderminster signalman will send an appropriate bell signal to Bewdley South either cancelling the train (once it is either locked inside or has arrived at Kidderminster) or intimating it is about to leave for Bewdley. An Up or Down train stopping in section at the sidings would be signalled normally but the Shunter would telephone the Kidderminster signalman on arrival once the train was at a stand clear of the siding points for a ground frame release and then proceed as above.