There has been much time to write these notes but nothing much to say and the deadline looms. We have had plenty of time to plan what we need to do before train services can resume and to plan what design changes would be required to provide an electrical release for the ground frame. Work by the Permanent Way Department stopped in March as the staff were furloughed and all volunteer work on S&T also stopped. The plan to run trains in the section from Kidderminster to Bewdley in April was abandoned as all services stopped in the lockdown. 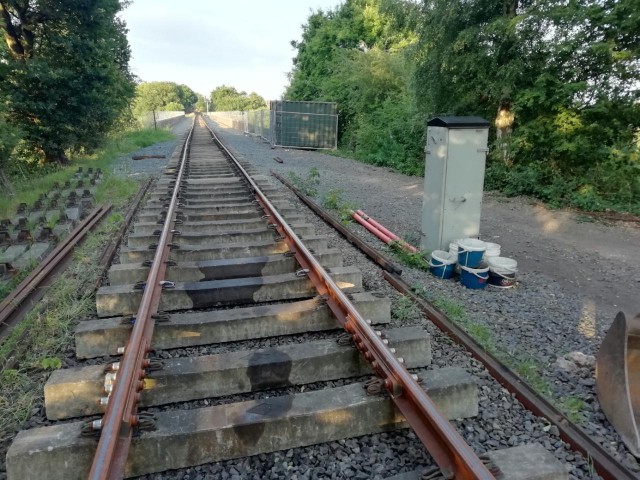 On 27 June at 07:09 the track has been laid across the viaduct and now would be an ideal time to drill the rails to fit the track circuit bonds. The rail drill is not yet ready and there is other work for us to do first. Photo: J. Smith

With some on-line training and risk assessment S&T activity was able to resume on Sunday 21st June but only for the essential task of fitting the FPL stretcher and padlocking it before planned stock moves on 24th June, hich was effected by John Smith. On 22nd June the paid S&T staff were unfurloughed and on Sunday 28th another trip to Foley Park to adjust the detection and then to Bewdley to finish off the rail drill saw an early finish (nowhere to make tea or to dispose of it). The rail drill motor shaft had to be machined and the coupling permanently fitted, using Loctite. 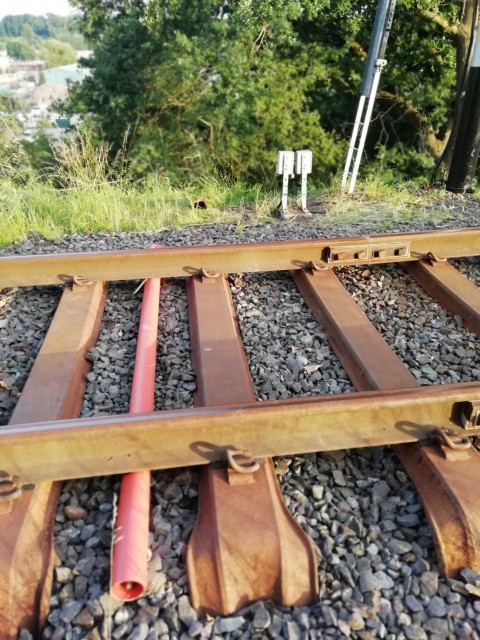 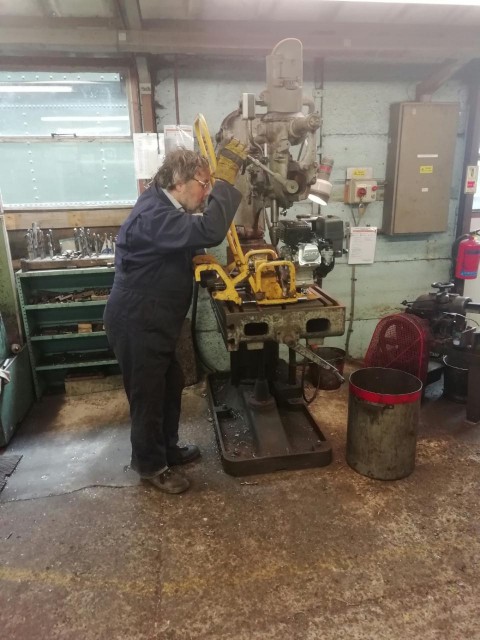 On 29 June at 10:44 the finishing touches for the new coupling - a recess in the motor shaft - is being drilled so that the coupling can be Loctited in place. With no refreshment available and everything closed, we had an early finish. Photo: J. Smith

On Friday 26th June, the stock movements took place and some large concrete bases were delivered to site by rail. James Cooper helped to load these using the JCB and driver Bob Dunn with James as second man took the goods train to Bewdley making the delivery in the evening. Our painting gang (Howard Bowling and Dougie Hutton) stayed on late on the Friday night to staff the train and help unload. Many thanks for tis assistance.

On Tuesday 30th June the paid staff - Matt and Bradley and sa couple of volunteers Geoff Finch and Paul Rowley went to Hampton Loade to put the finishing touches to the rodding run to the south end points. There had been some complaints from signalmen that indicated the compensator arms were touching in hot weather as a result of our work in February which had been rather more against the clock than normal. Quite a few lengths of rodding required a slight shortening to overcome this issue and to optimise the available adjustment on the points - these were not the usual bottle but a pair of threaded collars with less adjustment range. The job was undertaken with enthusiasm as it would represent a point scored by this team against the other volunteers! 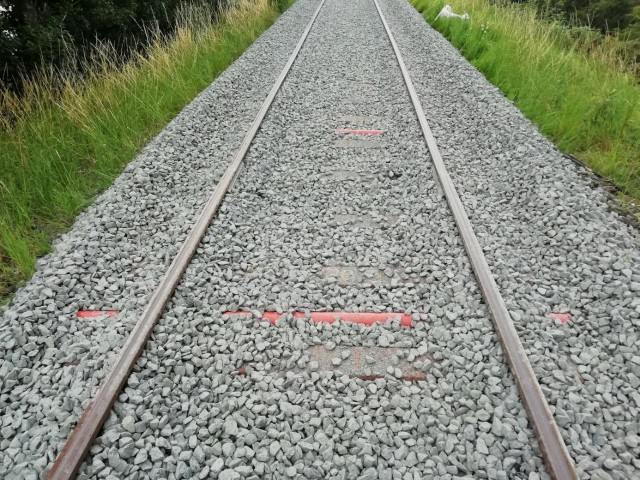 On 4 July at 15:55 the track has been ballasted. Clearly we have missed a trick as there is a lot of digging to do for each rail joint, to drill four holes and fit two track circuit bond wires. Photo: J. Smith

Sunday 5th July saw a larger workforce - Tony Cotterell, John Smith, myself, Dave Stowell, Matt Morgan and Bradley Windridge - meeting at Kidderminster but travelling separately to Foley Park (for social distancing reasons) with the new rail drill and track circuit bond wires. There were about 120 holes to drill in the rails and about 60 bond wires to fit to 30 rail joints between the Up Homes and the new points. Location 52 also needed a little work. This took all day and it was about 1730 before we had finished. We had completed the bonding as far as the points - beyond here there was still some P-Way work to do. We had also succeeded in recommissioning AC track circuit - this is still under possession so has no operational implications at this stage.

We stopped work at about 1600 to let a class 50 and assorted freight wagons pass through the possession and a bit later to let the light engine back. We had told the Driver earlier that we might have finished at Foley Park by 1600 which was when the trip was planned but were stll hard at it by then. 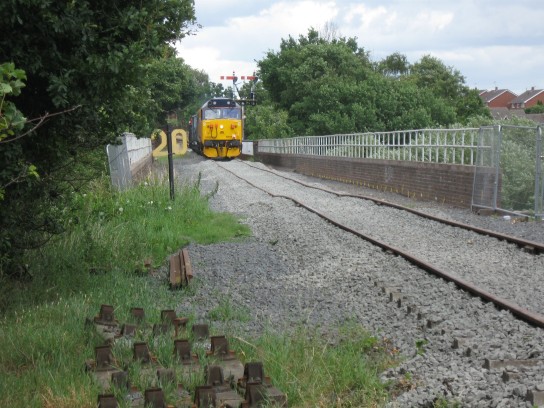 On 5 July at 15:41 a class 50 hauled freight appears moving rather more slowly than the speed restriction implies. The track has not yet been tamped but the track circuit it is standing on (AC track) is now working and fully bonded.

It was pleasant to make use of the facilities at the King & Castle, once the work was finished, to obtain an evening meal in comfort and safety, being able to keep ourselves 1m apart under the relaxed '1m+' rule - in this case the '+' was outside seating and a mild oral antiseptic, which was available in both pint and half pint quantities.

Sunday 12th July was a more difficult day - an early start at Bewdley of 0900 was required to do a little shunting to form engine and brake (08 and SR brake) to take the petrol rail drill to site (location 52 at Kidderminster Up Distant). The formation between Stourport Road bridge and Foley Park had been lifted and a few lengths of flat bottom rail laid ready for welding and so access was only possible from the Bewdley end. The aim was to drill the rails and connect the track ends at the Up Distant and to test track circuit AA2 (the one through the tunnel), which required a presence each end of the tunnel. Track circuit AB was also to be commissioned after our bonding work the previous weekend. 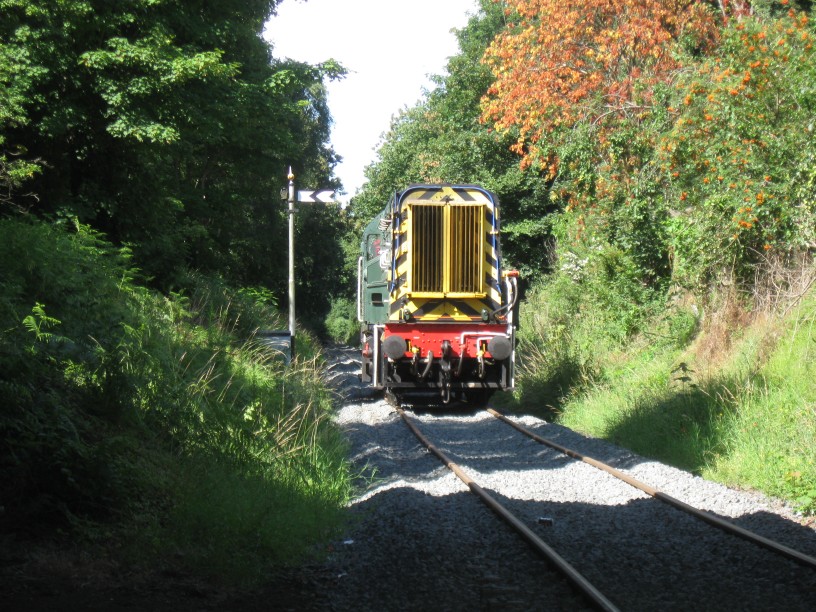 On 12 July at 10:33 we have stopped between the Up Distant and Stourport Road bridge, clear of AA2 track circuit, as that is as far as we are allowed to come. 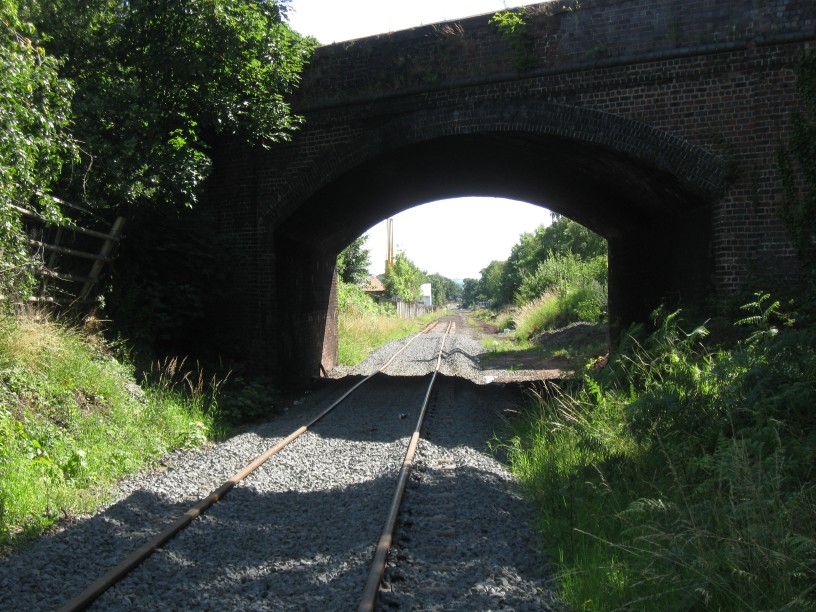 The line beyond the road bridge has been lifted and some flat bottom rails laid but not yet welded as of 12th July.

After an hour and several drill bits later we realised that the eight holes we needed to drill here were not going to happen as the rails were so hard. We made temporary connections here and at a fishplated joint at the summit (which was likely to be used as a stressing point and then welded) to allow the track circuit to be tested. Both AA2 and AB track circuits were now operational, leaving just AA3 where we could do nothing until we had some track to play with. We could see a little bow wave of work developing. 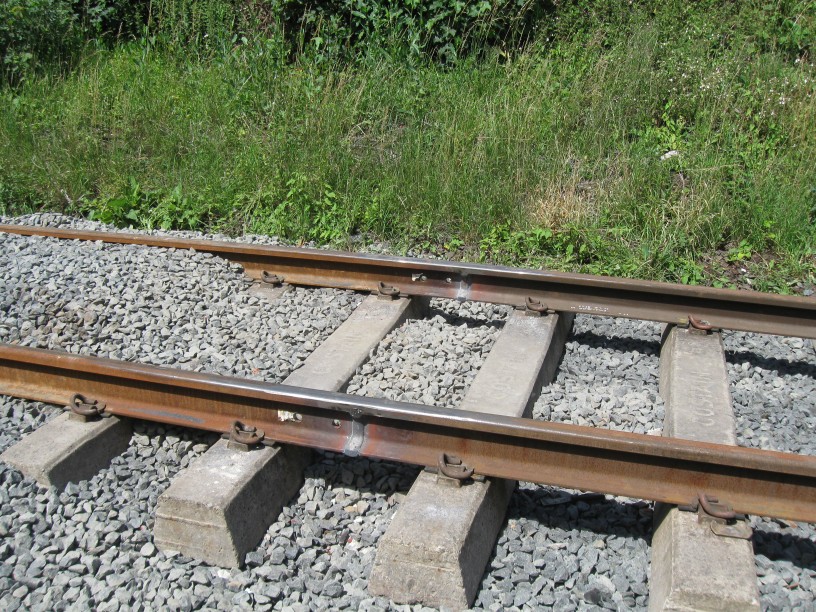 Another joint that will not have to drill, thank goodness. It is 12:30 on 12th July and the drill bits are getting blunt or broken.

On 15th July a mid week foray by Messers Cotterell and Smith with some newly sharpened drill bits and the manual rail drill saw these twelve holes drilled so that track ends and bonds could be fitted the next weekend. 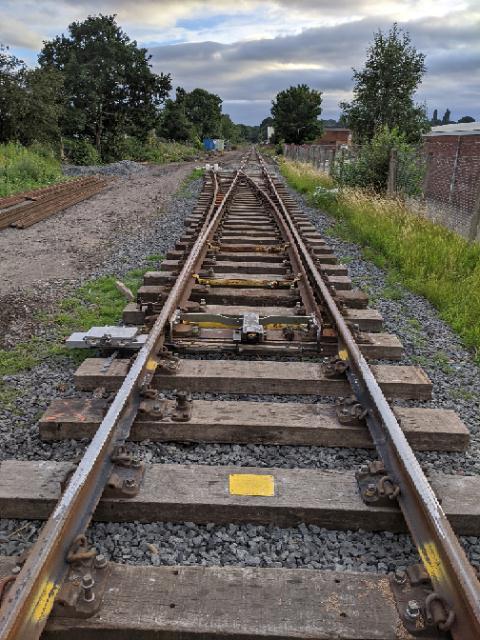 There are quite a few bonds to fit through the new points and we will have the luxury of no ballast. This photo was taken on 18 July at 09:05. Photo: J. Smith

On 19th July we still had quite a bit of work to do. The track ends on AB track needed to be reterminated, there were twenty two track circuit bond wires to fit (forty eight holes to drill including the breather switch bonds) along the length of AA3 track and the track ends to wire up both ends. We had two manual rail drills and there were nine of us so we were able to split up into several work teams. An attempt to deliver the order for rail drill bits had been made but the offices were unattended and the courier took them back. They have not yet arrived. We now have no spares. 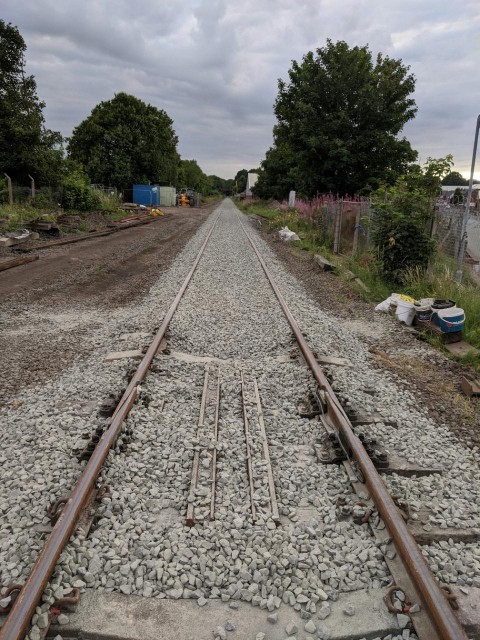 It is 11:21 on 22 July and, suddenly, there is ballast everywhere. Fortunately we have fitted the track circuit bond wires and AA3 track circuit is working. Photo: J. Smith

So by the end of 19 July, we had fitted all the bonds, all the track circuits were working (but had not yet had their final test), the points were protected by the signalling system (although final testing was still to do) and the sleeper had been drilled to secure the points, which would be fitted after the testing was complete. The token system had been tested between Bewdley North and Highley. The signal box diagram in Kidderminster box had been patched to show the partially complete sidings installation. Indication was provided to confrim the points were set and detected correctly.

It appears that the stressing points have been fishplated and so yet more bonds need to be fitted. Another mid week foray by Messrs Smith and Cotterell with the only remaining drill bit saw the holes drilled, leaving just the bond wires to fit on the Friday or Saturday.

The quality of mercy is not strained. It droppeth as the gentle rain from heaven upon the place beneath. It is twice blest: it blesseth him that gives and him that takes.

The monologue by Portia in Shakespeare's 'The Merchant of Venice' is set in a Venetian Court of Justice. It is the speech in which Portia begs Shylock for mercy. It seems appropriate. Well certainly 'mightiest' is an understatement but it is more likely to be the actions of the tamper than even the heaviest hail stone. There is only so much protection one can provide: a strong lid, brightly painted so that even the most careless and incompetent Driver should be able to see it. Well supported so that it is held firmly in place. The detection box and most of the lid did, indeed, remain in place. 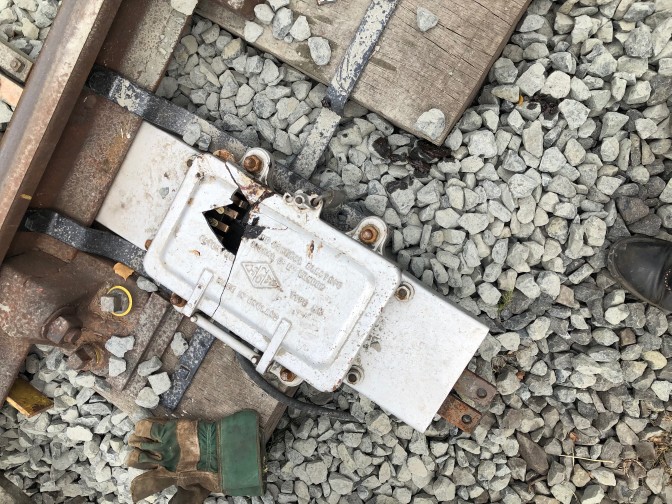 Some furious mid week work by Fred produced a workmanlike repair to the lid, pictured below, and to the contact block. The repaired parts were fitted on 26 July, before we could start the commissioning work. 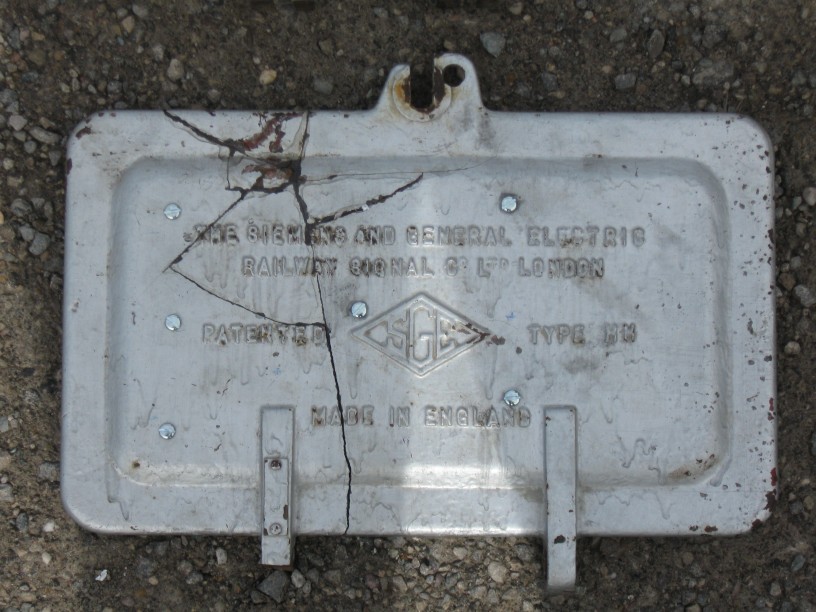 A careful gathering of the pieces and this nine piece jigsaw puzzle was assembled and bonded together. It is 10:43 and we had our briefing and are about to set off for Foley Park. Photo: C. K. Hall

A comprehensive test of the signal line controls and track circuits could then start and was completed by 17:00, when the signalling system was booked back on, leaving the possession to be relinquished on Monday morning before trains could run. 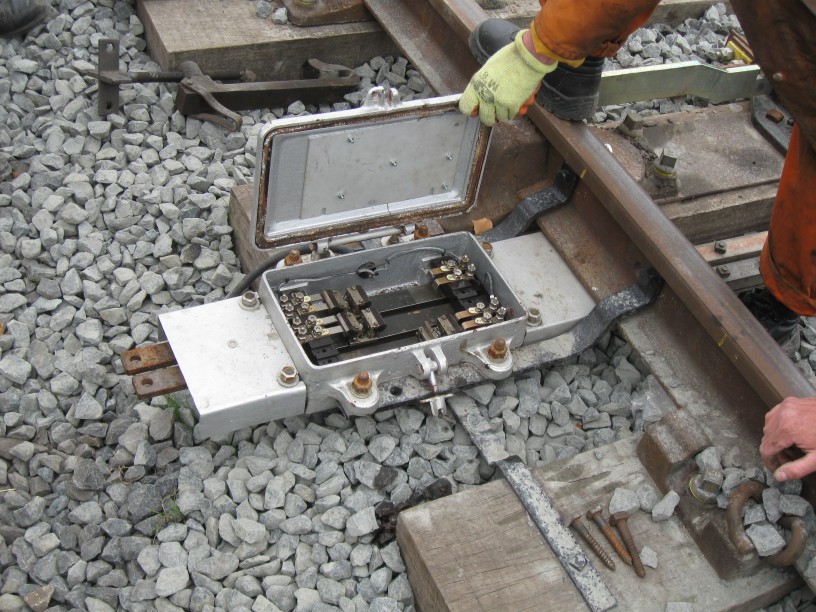 The signal box diagram has been patched, instructions to the signalmen for the new instrumentation issued and we have finished the Winter work. 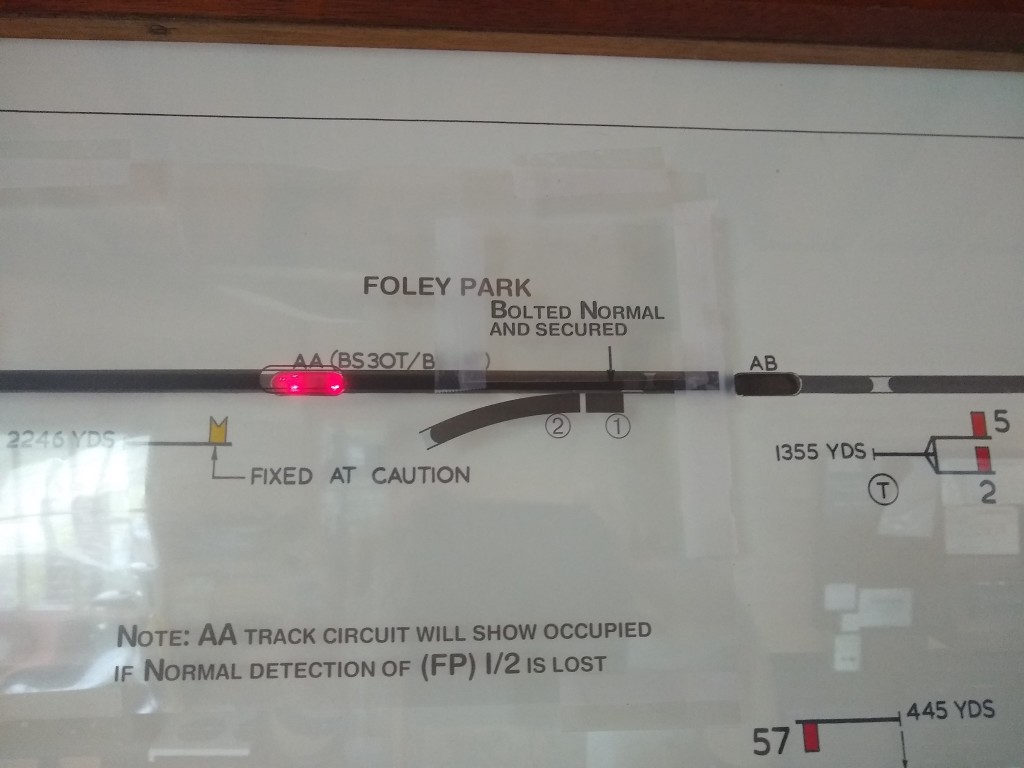 The first movement through the section under normal working, since December 2019 is captured here by the signalman shortly after 09:00 on 27th July as the light engine approaches Kidderminster. The diagram has been patched to show the new pointowrk. Photo: A. M. Hassell

So, the signal box diagram has been patched, instructions to the signalmen for the new instrumentation issued and we have finished the Winter work. Now we need to start on the 'heavy gang' work to install the point rodding, the first session of many is planned for Sunday 2nd August. Digging in three large concrete bases will be a lot of work! 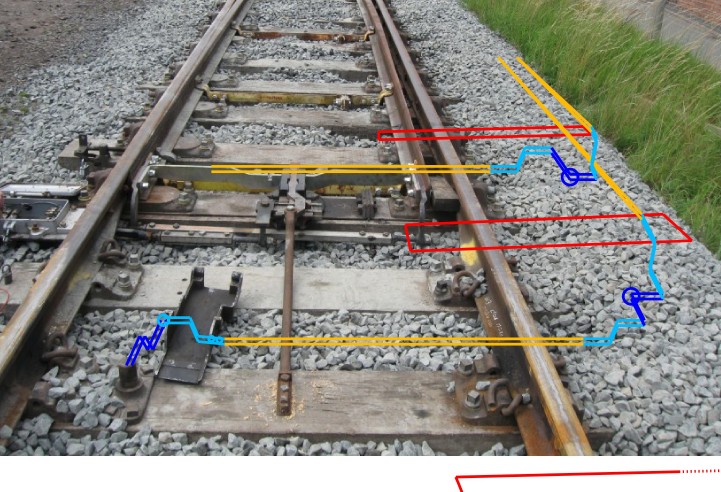 Belt and braces. The new points are bolted, the FPL stretcher is padlocked in place and coach-screwed to the sleeper. The points are clipped and padlocked and scotched. The route for the point rodding (orange), pin joints (cyan), cranks (blue) and concrete bases (red). The cranks will be mounted on straps attached to the concrete bases. Photo: C. K. Hall