The last article covered our activities up to the end of July (leaving some work still to do on Arley’s Up Distant). One of our first jobs was therefore to install nine or so signal wire stakes and pulleys in the Up Distant wire run there, lifting the signal wire a foot or two above the ground level, clear of the collapsing bank (where the rodents had been digging) and above the thriving vegetation. This should mean that the Arley Up Distant will now be a much easier pull.

The problems with the track circuit indications between Bewdley South Down Distant and Bewdley South box have not gone away despite the ameliorating actions we took. Refurbishment of some of the location cupboards, including reterminating some cable ends was a slow job between trains but has been concluded allowing fault finding on the cables to start on 16th October (a day with no train service). The cables are over thirty years old and provide both power (110V) to the remote locations and indications (50V) back to the box as well as the single line controls and indications.

Conductance and insulation checks on the cable have identified that the main signalling cable between the Up Starting and the Down Home signals was ‘flat’ (loop resistance OK but high voltage earth resistance is low) as was the 110V 2-core power cable between Down Home, berth track location and Down Distant, the other cables being satisfactory. A small amount of moisture ingress can cause this, especially at a cable bend. The 27-core signalling cable was reterminated at the Down Home location and the power cable reterminated, so far, at the Down Home and berth track locations. With the Editor’s deadline pressing and Half Term week upon us (trains running all week) the account of this work will be continued in the next issue after final testing has taken place.

The wooden post of Highley’s Down Distant Signal had been found to have some rotten wood at the bottom of the post, not bad enough to be an immediate problem but we decided to renew the signal. We had a steel post, ladder, finial and the necessary fittings for a fixed distant in stock and so we recovered the post from the Stourport triangle using a P-Way trolley and scraped and painted it. We had to make the crow’s nest support and handrail verticals but did have the necessary castings to fit the post. The newly painted signal has been transported to site and the existing signal will probably be replaced, using a road railer, in the next month or so. The signal post is about twenty feet from the nearer rail and we may reuse the remaining good length of wooden post to replace Highley’s Down Starting Signal (which has a fairly short post) in due course.

Highley Down Distant post under construction at the end of August - the crow‘s nest support and vertical handrails had to be fabricated but the rest was in stock. [Photo: Tony Neath]

Token carriers have suddenly evaporated (some damaged and one or two missing) and we have had half a dozen castings made from an existing casting rather than a wooden pattern (which can give shrinkage issues). Machining the surfaces that need to be a good finish - where the release pin slides for example - and drilling the holes in the correct position (making a jig to locate them correctly) is the sort of ‘one-off’ craftsman job that is always interesting but is extremely resource-intensive - making the first one has taken over six man days and it is still not complete (see picture, above) so it is likely to be several months before all six are completed. 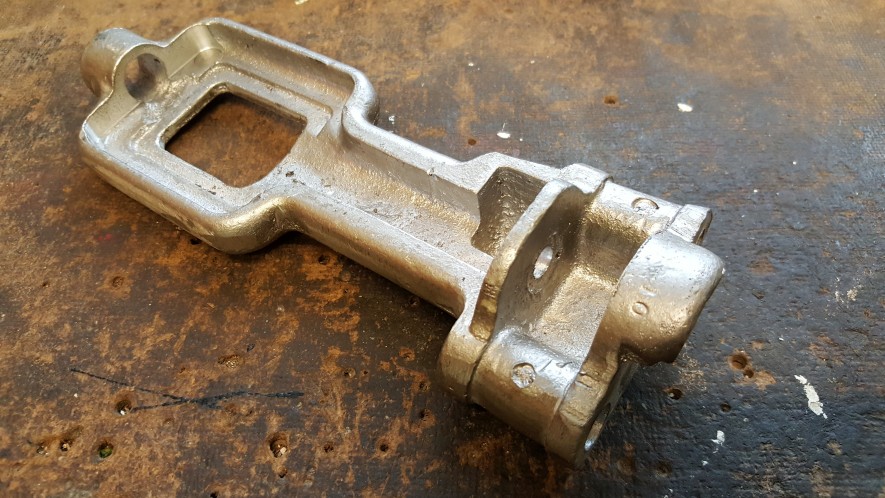 The partly-machined token carrier casting - the hoop of tubular metal fits into the two large holes at the bottom right and is rivetted in position. The smaller hole is for the catch that retains the token and both sides of the right hand face need machining to let the catch be turned easily and to locate it positively so that it has to be lifted against a spring to release the token. At the top left you can see that the end face has been drilled and machined so that the token is an easy fit - this extra machining was to overcome the shrinkage. [Photo: John Smith]

The omnibus telephone between Hampton Loade and Highley was reported not to be functioning - the ‘Omnibus circuit’ is a simple traditional analogue line running lineside between all the signal boxes that provides a safety-critical backup to the modern ‘high-tech.’ internet-based system used across the railway. We had a look at the route of the cable. It was on the surface where the P-Way had been working and we found the omnibus cores in the cable had been pulled out of a joint. A temporary repair was effected.

Northwood Crossing is classed as being a ‘locally monitored’ level crossing: this means that if all the electrical equipment is functioning and the crossing road lights are operating correctly then loco drivers will see a white flashing light as they approach the crossing. The driver is still responsible for checking that the crossing is actually clear of obstructions however. The crossing is powered locally from the public mains supply and a battery backup is provided to ensure that the road lights will continue to operate for a period even if the mains supply should fail. In this situation (i.e. on standby power) the driver’s white light will not illuminate, thus indicating that there is a fault, and locomotive crews will report the fact that there is a problem.

The public mains supply in the Northwood Lane area experiences notably more that its fair share of interruptions and as a result Signal Engineering staff have been called out to deal with apparent faults that, on investigation, turn out to be beyond the railway’s control. One recent project has been to install an alarm circuit from Northwood Crossing to Bewdley North signal box to indicate the condition of the incoming mains supply. The signalman is now able to warn Drivers when there may be a problem with the crossing and thus avoid unnecessary fault reports and abortive staff call-outs to site.