I started writing these notes in early December so that I donæt have to rush around in January when they are due (and when we might be busy with Winter work) as it is much simpler to bring them up to date than to start from scratch.

In the last notes I mentioned how difficult it was to diagnose an intermittent fault (it would be easy here for the medical profession, as a careful and precise description of the symptoms would be sufficient). We had also encountered a fault that was the result of several separate minor faults. In order to help with the analysis of what might be wrong, we have built a data logger which can use spare relay contacts to generate a log of the sequence of operations at a particular site. This will allow a reported fault at that location to be correlated with the logged data and the cause to be better understood.

Northwood Crossing had been reported on several occasions as not working correctly and although we thought we had identified and rectified the fault, this location was chosen to try out the new data logger. Over a few weekends we improved the performance of the unit and were pleased to see that the crossing was operating exactly as required, the track circuits and treadles operating in sequence with the Driveræs white light and functioning as designed.

The data logger has eight digital inputs and three analogue inputs which should be enough for most purposes. It runs RISC OS 5.26, an open source operating system and allows data to be downloaded monthly (or more frequently when required) to a 32Mbyte USB flash drive.


An extract from the logging information taken on 2nd December 2018 - the time at which each train Éstruck inæ (occupied the approach track circuit) - to which I have added a note to say whether an up train or a down train. I have also added its description from the traffic notice. This confirmed that each train was recorded in the log with none omitted.

More detail of the data logger would be inappropriate for this magazine but an article has been prepared for the Signalling Record Societyæs quarterly journal, titled 'Fault Finding on Heritage Railways', and has been shared with the minor railways section of the IRSE.

On 2 December the P-Way had decided to replace two sleepers at Bridgnorth and this would normally be something that did not affect our Department except that some of our equipment was attached to those sleepers. Accordingly we turned out to work together, starting as soon as the empty stock for the staff train to Arley had been drawn out of the Hollybush Road Siding and the rear engine shunted onto the back of the set in the platform.

The trap points, associated detection and the double disc signal were disconnected and we removed any of our equipment that might be Éin rangeæ of the P-Way work, including the adjustable crank and detection rods. The two sleepers were quickly reduced to matchwood under a determined attack by crowbar as the first picture shows.

Help from the MPD in providing 110V supplies to site for power tools had been requested in the bar the night before and was most appreciated. Station staff were also to be thanked for providing a brand new 110V hand drill for sleeper drilling. We had the right wood auger bits for our 3/4Ģ bolts and we had brought our magnetic drill to drill the solebar for our equipment. We borrowed some drill bits from the MPD for this purpose.

We had plenty of willing helpers to undo the fang bolts to remove our equipment, a luxury not normally enjoyed. We were also provided with cups of tea and felt well looked after. We had brought plenty of spare pins for the joints. We helped with some of the hole drilling for the P-Way as the solebar was drilled for four-hole chairs and two-hole chairs we being used. 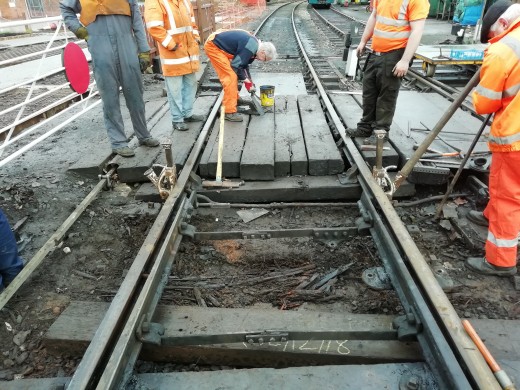 The remains of the two sleepers can be seen, still to be shovelled out, plus the first of two new sleepers has been slid into place. It is 11:30 and the first estimate of three hours for completion of the P-Way work looks a bit optimistic. There is still a new soleplate and two new sleepers to drill for the chair bolts quite apart from the six holes we need to drill to refit our equipment. The track has been jacked up to allow the new sleepers to be slid underneath the rails. [Photo: J. Smith]

By about 14:30 the P-Way work was substantially complete and we started to refit our equipment, which required another six holes to be drilled and four fang bolts and two coach screws fitted. The track was helpfully jacked up for us to fit these and our work was complete by about 15:30 and by 16:15 we had reconnected, adjusted and tested our equipment and booked it back on again. 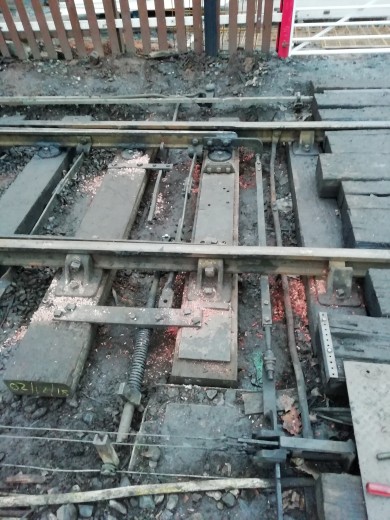 All complete at 16:00 with our newly fitted equipment surrounded with wood shavings. All that is needed now is to adjust and test. [Photo: J. Smith] 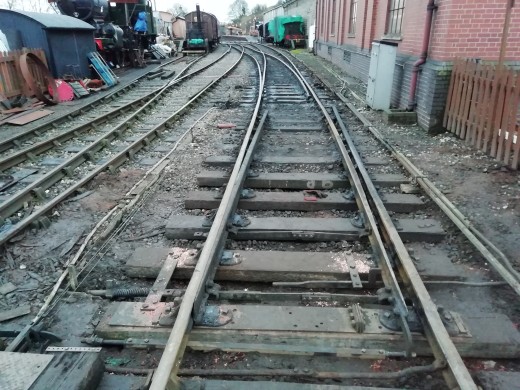 All complete - the view towards the station. [Photo: J. Smith]

During Santa running in December, the platform 1 starting signal at Kidderminster failed with a broken down rod between the route indicators and the signal. A temporary repair was effected with a down rod adapter (of which we have a couple handy for just this problem) which makes a joint between the two broken ends. A permanent welded repair was effected during the week commencing 14 January, with thanks to the C&W for their help.

On 30 December we took the opportunity, with trains running, to take some refurbished equipment from Bewdley to our stores. As we arrived at Kidderminster, the signalman congratulated us on our speedy response to a fault he had just put onto the fault line. He explained that the Éonæ indication for the Down Main Advanced Starting signal (no. 60) had failed although the arm was correctly returning to Danger (which meant that the Éonæ contacts would be made up). This is an awkward fault as it would prevent any signalled movement onto the main in the Down direction (including running moves from Network Rail). Fortunately we had sufficient time to investigate and repair the fault - one core of the cable had broken at the top of the signal post and a temporary crimped repair was effected. This job, to reterminate the cable up the post, would be added to our ÉWinter Listæ of jobs - currently replacing the detection on a new half switch at Highley and replacing the Down Starting signal there.

There had been complaints about pointwork heavy or difficult to operate at Kidderminster and so we did a survey of the rodding on 6 January. Although several compensators were worn, a few were so badly worn as to require replacement. Situated as they were, buried in a rodding run of some thirteen rods, this would also have to be a Winter job. The compensators on 33 FPL (facing point lock), that on the main run to 31 points (the connection in the compound providing access from platform 1 to the Yard and that on 17 FPL would need to be replaced as well as a worn pin on that for 25 FPL. We had replacements in stock as we had refurbished worn units from elsewhere. We rely upon the C&W Department for machining the main pins on the compensator bases and we have a small queue of about half a dozen worn ones awaiting their attention as and when convenient. The Winter work will deplete our stocks somewhat!

Prior to a short box turn on 7 January at Bridgnorth the opportunity ocurred for fault finding on platform 1 ÉRight Awayæ indicator circuit and a short on the cable to the plunger by the water column was found and isolated. The other fault, which had prevented use of the Down Home signal, was described in helpful detail on a scrap of paper in the box giving much useful information than had been included on the fault line or the defect list in the box. Sufficient in fact to make it clear that the fault was at the signal and not in the box so nothing that I could do alone - another Winter job for our list. I was able to deliver a re-welded catch handle to Bewdley on my way home and the paid staff, Bradley and Matt (his first day in the job) fitted it to no. 30 lever in Bewdley South that day. Many thanks to Gary Townley for the welded repair (to replace a broken spring requires the catch handle rod to be cut and re-welded).

During February, March and April our activities included refurbishing an electrical detection box for installation next Winter if the pointwork for Foley Park Permanent Way Sidings is installed during the closure of Falling Sands Viaduct. The original Kidderminster ground frame will be used there to control the new pointwork so we have dug it out (literally) ready for re-use. Our other activities in the last few months include repairing some damaged metalwork at Kidderminster, which required the application of some heat and skill in equal measure, reinstating the cable over Borle viaduct after the Civil Engineering work there and refitting the mechanical detection at Highley after the normally closed switch, which had become worn, had been replaced. 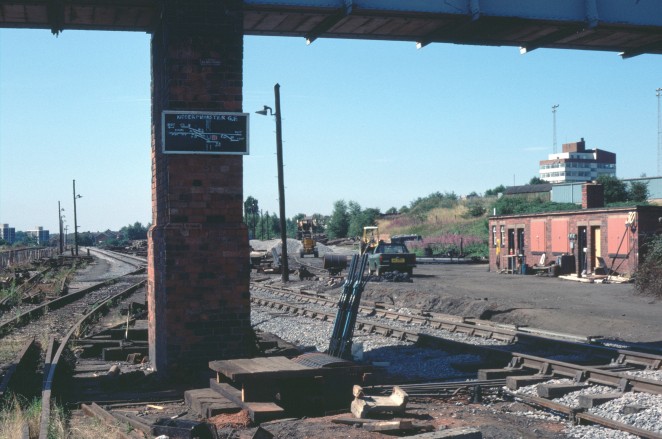 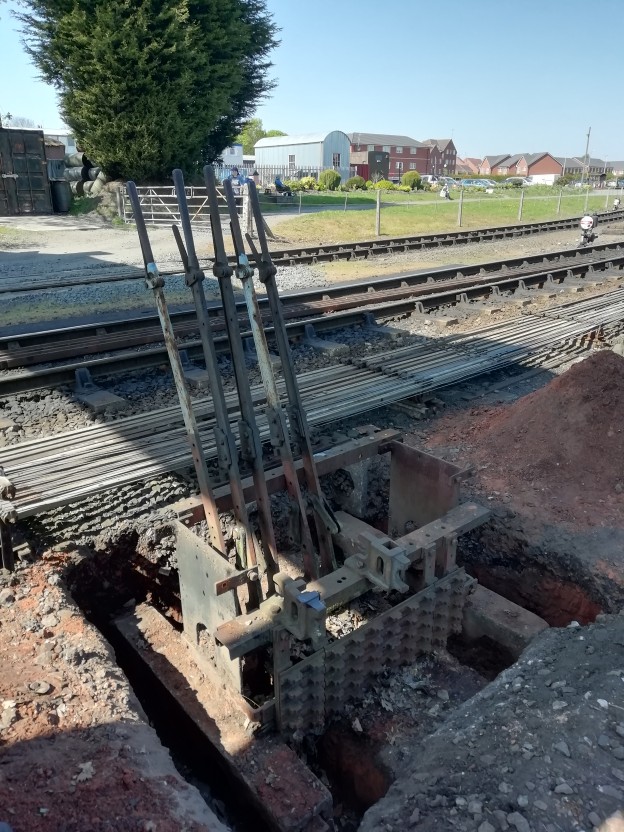 The Kidderminster ground frame stripped down and dug out ready for refurbishment and re-use at Foley Park. [Photo: John Smith]

The age profile of the volunteer staff in the S&T Department is rising year by year and we are keen to attract existing volunteers with an operational role to join us. The job is an interesting and demanding one and full training would be provided to anyone willing to take on the extra reponsibility. The job offers enormous variety and we would be pleased to show off what we do to anyone with a genuine interest. Please feel free to come along to Bewdley buffet for a Sunday breakfast to meet the team.